A few weeks ago I received an email from a gentleman named Don Charles who said he represented Calvin "Fuzzy" Samuel. Fuzzy is the former CSNY bassist who performed on the tour that would become the 4 Way Street live album from which we took our name. He was a member of Stephen Stills' band Manassas. He also performed on Neil Young's iconic "Ohio."  Don wrote that Fuzzy was doing his own thing now, and inquired as to whether we would be interested in working with him. 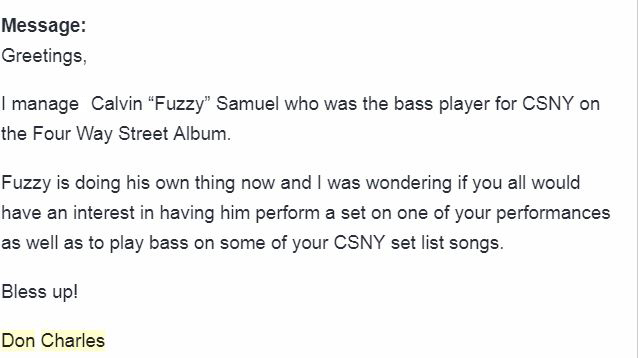 Shortly after responding with a resounding "hell yeah!" I received a call from a man with Caribbean accent talking about how we might coordinate our schedule with Fuzzy's. The next day, Fuzzy called me and introduced himself, in his own gentle and kind manner. We talked about music and the philosophy of life, and a friendship was born. He told me how much he appreciated what we did musically. He spoke in his soft Antiguan accent of his time with Stephen Stills & CSNY. He has lots of stories. Over the course of a few days, we settled on a June 22nd date at The Warehouse LI, in Amityville, NY.

Fuzzy sent me some demo recordings of his material and the first thing that came to my mind was that Kerry Kearney would sound great on Fuzzy's stuff. If you've never heard of Kerry, you should look him up. He is a hugely talented slide/rock/blues guitarist who specializes in what he calls "psycho-delta" style.  Lucky for us, Kerry was available!

So the stage was set. Fuzzy flew in from his home in Dayton, OH on Friday night, took an Uber from LaGuardia straight to our rehearsal studio on Long Island. After brief introductions, we got right to work running songs for Saturday's show.

We had a great rehearsal, after which we spent a little more time just talking and getting to know each other. Fuzzy had more stories to tell, and we were eager to

After rehearsal, I drove Fuzzy back to my house about another 30 miles east, where he would be staying. Fuzzy is a wonderful house guest, perhaps because he often had to stay with friends and bandmates throughout his career, including Stephen Stills. He has an easy way about him, both comfortable and unobtrusive, and there was none of the awkwardness you might expect from a first time house guest, no less one you had literally just met (as was the case for my wife, Adele). We took the time to build on the friendship we had started, talking late into the evening until fatigue from a long day set in. 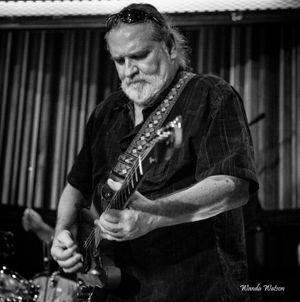 Saturday Kerry had a gig during the day, so he wasn't able to get to our show before 8:30pm, so Four Way Street played some CSNY material to open the show while we awaited his arrival. He arrived a little before 9pm, when we immediately called him & Fuzzy up to the stage, where the two men met for the first time. They shook hands & plugged in.  Fuzzy strapped on his now trademark bouzouli, kind of a cross between a lute and a mandolin, and kicked off,with a growl & a moan that could have emanated from the deepest bayou, a swampy version of Eddie Grant's "Electric Avenue." Kerry Kearney jumped in with scorching slide work that left no doubt what kind of a night this was going to be.  Next up was blues shuffle "Ain't Gonna Cry," in the middle of which Fuzzy swapped his bouzouki for bass, temporarily displacing Four Way Street's Rob Hintz as he commandeered  Rob's instrument. The boys of FWS joined in on the chorus, bringing their signature harmony vocals on the chorus call & response. Fuzzy called out "Love The One You're With" (there was no set list at this point), adding a percussive bass line to our arrangement. 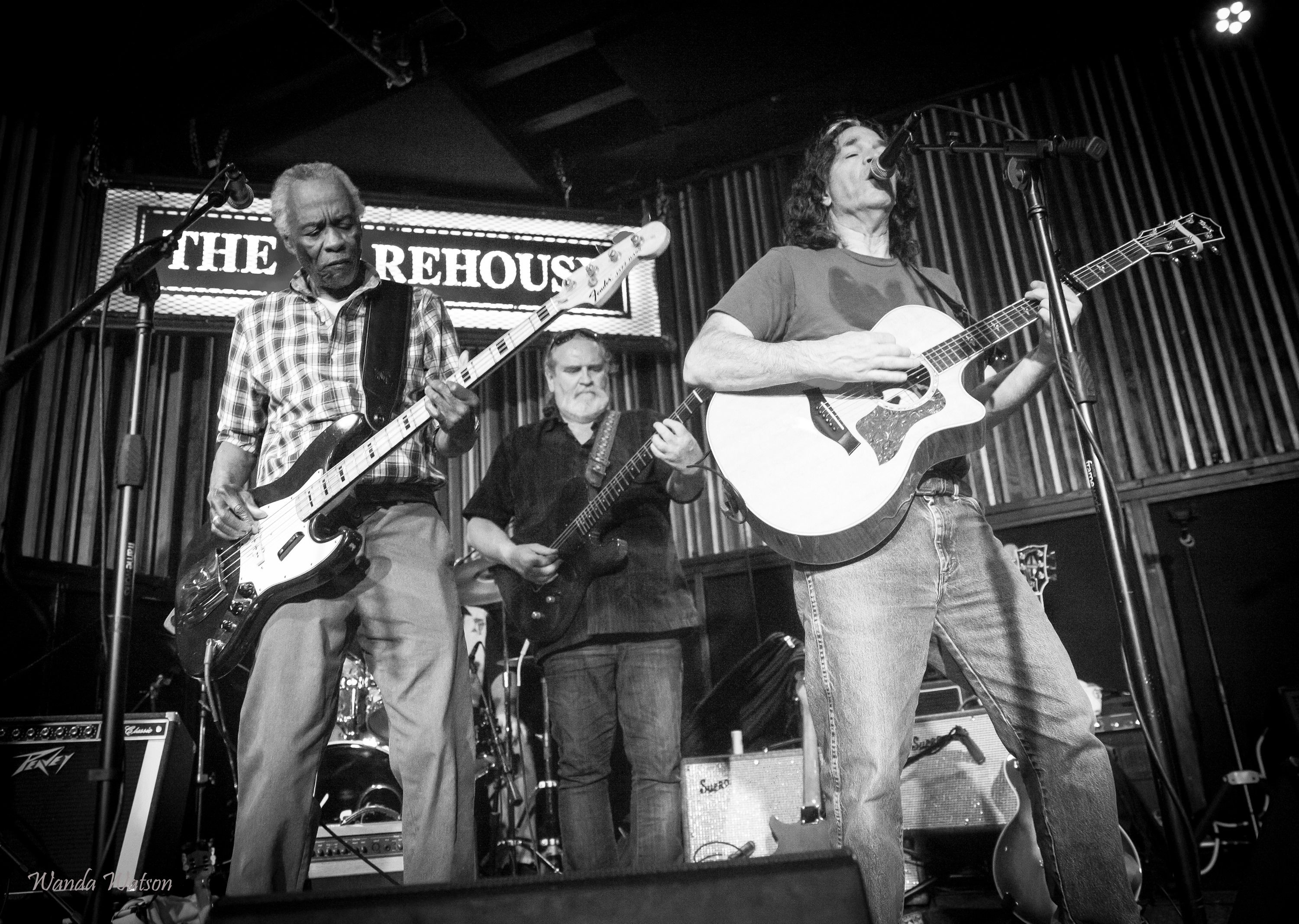 This was followed by the iconic Neil Young protest song "Ohio" which reached a feverish crescendo, driven by Fuzzy's commanding presence. I reminded the audience that Fuzzy was the bassist on the original record. They responded enthusiastically with awe and a just little reverence for a man that had lived and been a part of musical history.

A highlight of the evening was and extended version of "Carry On" modeled roughly after the version from the "4 Way Street" album. It featured a jam where all members had moments to shine, but the coolest moment was when Fuzzy & FWS bassist Rob Hintz faced off in a dueling "bass-off," trading solo licks to the delight of both the crowd and the musicians onstage. 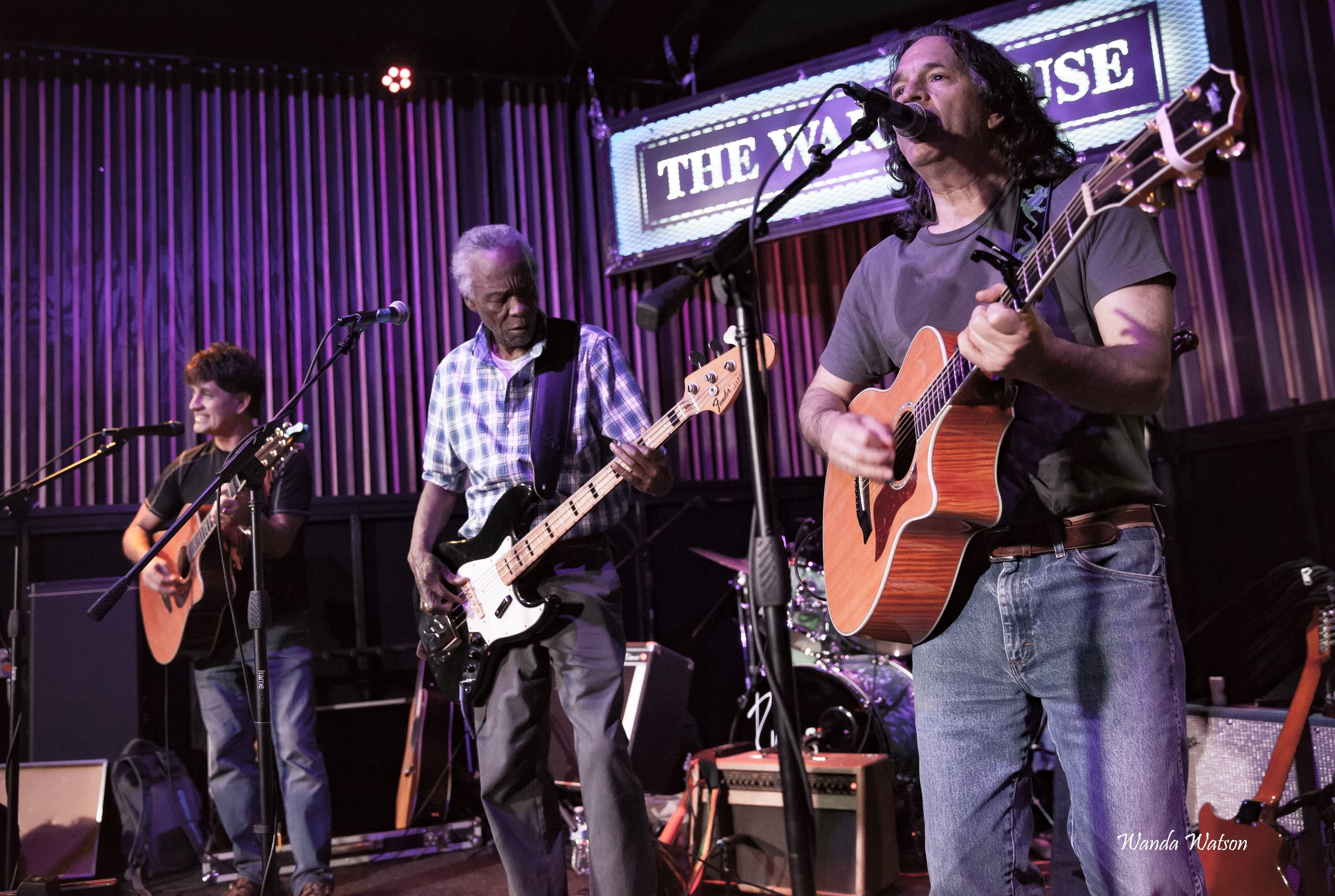 Fuzzy switched gears and instruments, as he returned to the bouzouki to lead the band for gospel-tinged versions of Bob Marley's "No Woman No Cry," where Chris Mingoia, Paul Michaels, & I had a chance to add some background vocals. Cajun flavored "Louisiana" was next, followed by Fuzzy's remake of "Amazing Grace" in 6/8 time with additional lyrics by Fuzzy. The set ended with Fuzzy's "1969," an ode to a time gone by, which once again allowed FWS to provide backing harmonies.

We closed the show with "Suite Judy Blue Eyes," and a feeling that we had all experienced something very special. -Chris Cangeleri 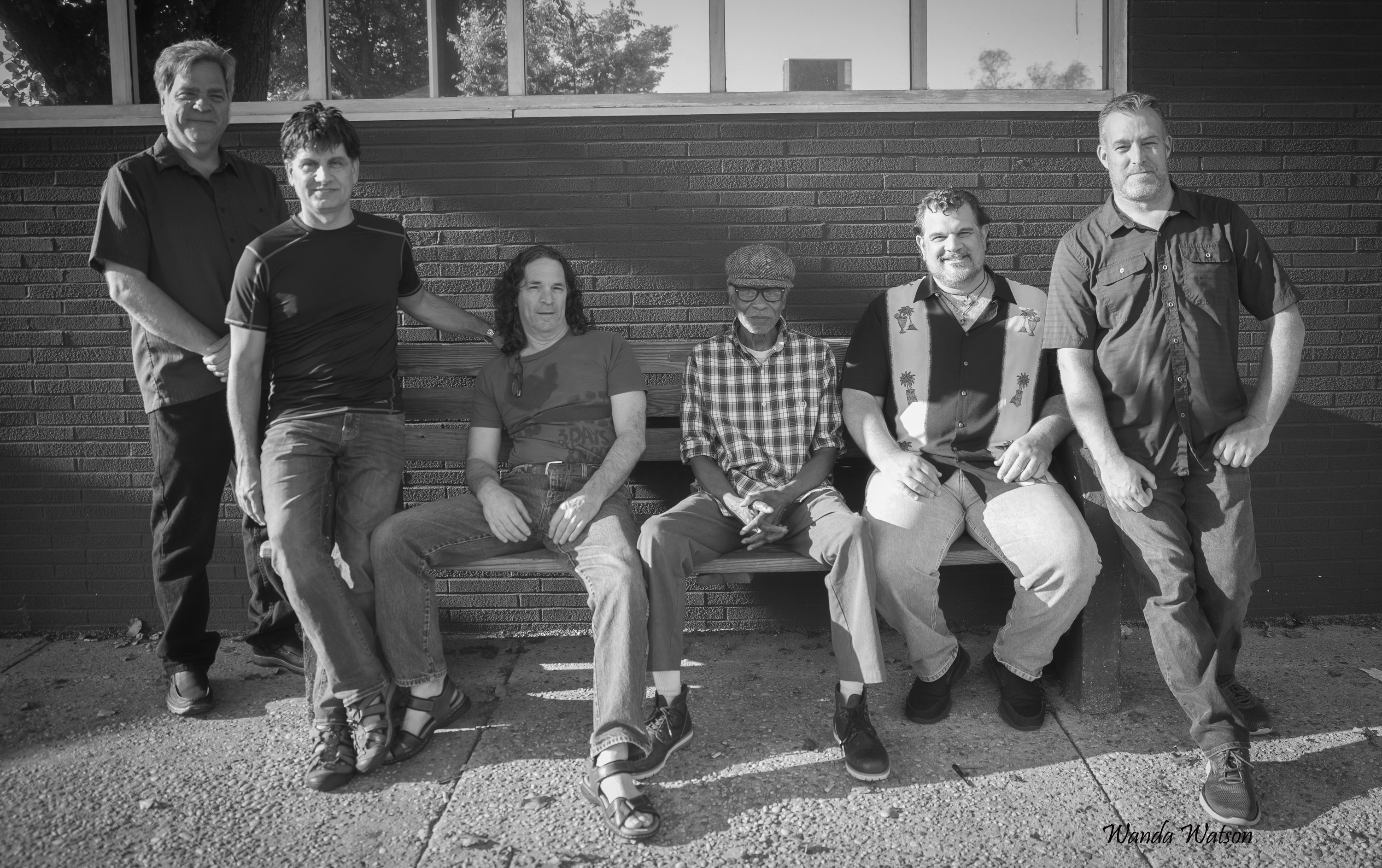 We had a great time performing at Rich Rivkin's Woodstock Revival 2019. Rich has been doing this for year, and this year he expanded the event to two days. It was a great success. We were honored to share the stage with so many great bands! Here are some highlights! Thanks to Fay Broder & Sheri's Scene for the video!

Love The One You're With

Check out our 2019 Summer concert schedule! Check back for updates!

Join us on on Friday, April 5th, 2019, for a very special performance at the landmark Stephen Talkhouse in Amagansett on the south fork of Long Island. Stephen Talkhouse is perhaps one of the best kept secrets of the Long Island music scene (for anyone west of Riverhead, anyway). They have a stellar sound system and an intimate setting. You never know who might show up! ADVANCE TICKETS

What a fantastic night for our "re-debut," and no better place to return than the place where we started, KJ Farrell's, where the crowd was raucous and raring to go, singing along on almost every song!  It was a bittersweet night, as we reflected on our departed bandmate, Sal Mingoia, and welcomed Paul Michael who has done an outstanding job filling some giant shoes.

Here are some highlights: 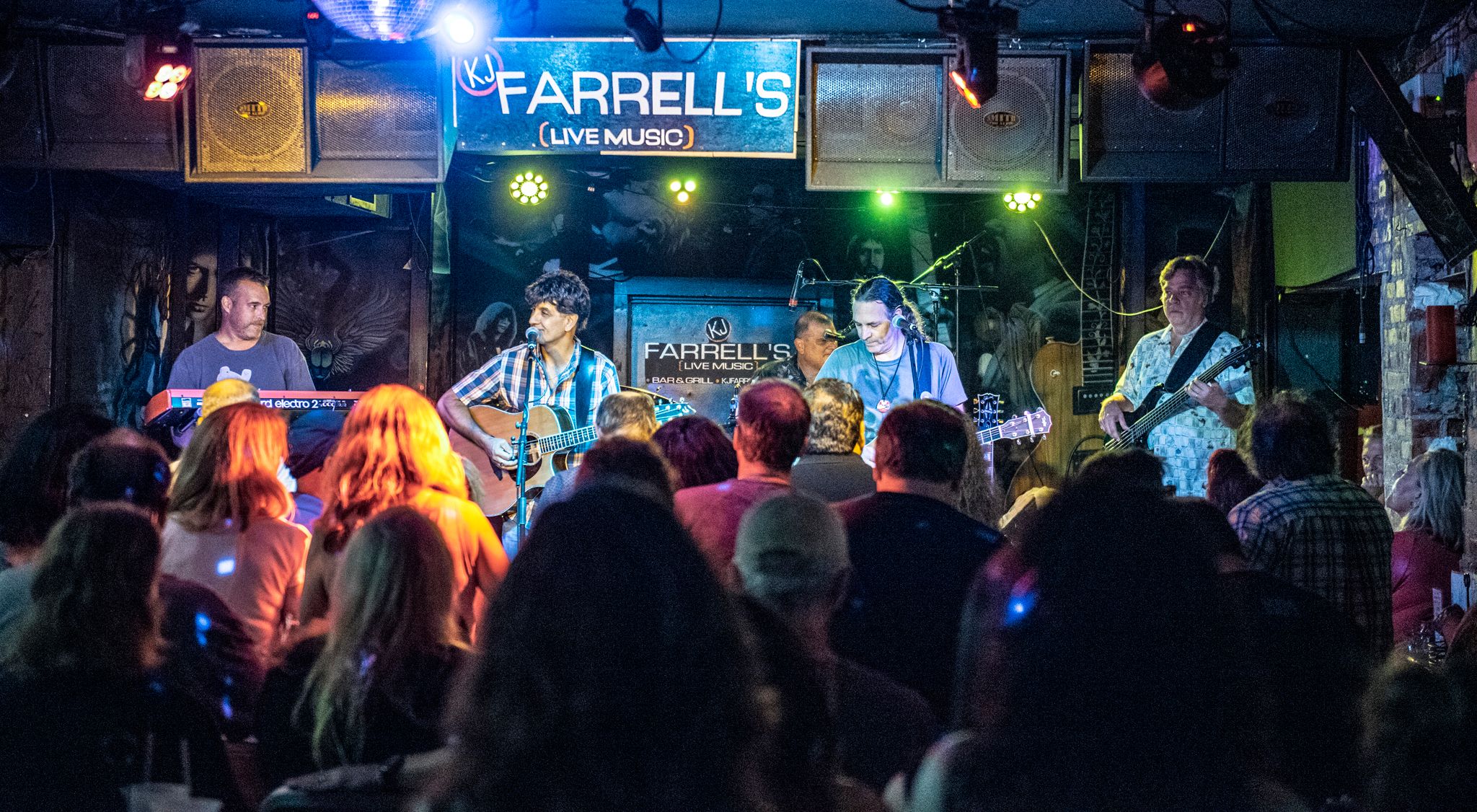 Welcome Paul Michaels. FWS is BACK!

Many of you may have been wondering where we've been for the past year. Sadly, we have been navigating the profound loss of our friend and brother Sal Mingoia to lymphoma. After months of soul-searching, we decided to move forward because, as Chris Mingoia told us, that's what Sal wanted us to do. This led to an extensive search for someone who could step into Sal's shoes and do justice to the immense role he played for the band. We are happy to announce that search has paid off, big time. We are thrilled to announce the addition of Paul Michaels to Four Way Street. Paul is a Berklee-trained artist who brings outstanding musicianship and beautiful vocal talent to the band. His prior friendship with Chris M and Sal made him an obvious choice, and once we started rehearsing, it became clear he was, by far, the best fit for this band, both musically and personally.

We are ready to start booking the band, so stay tuned! Thank you for your patience and support! 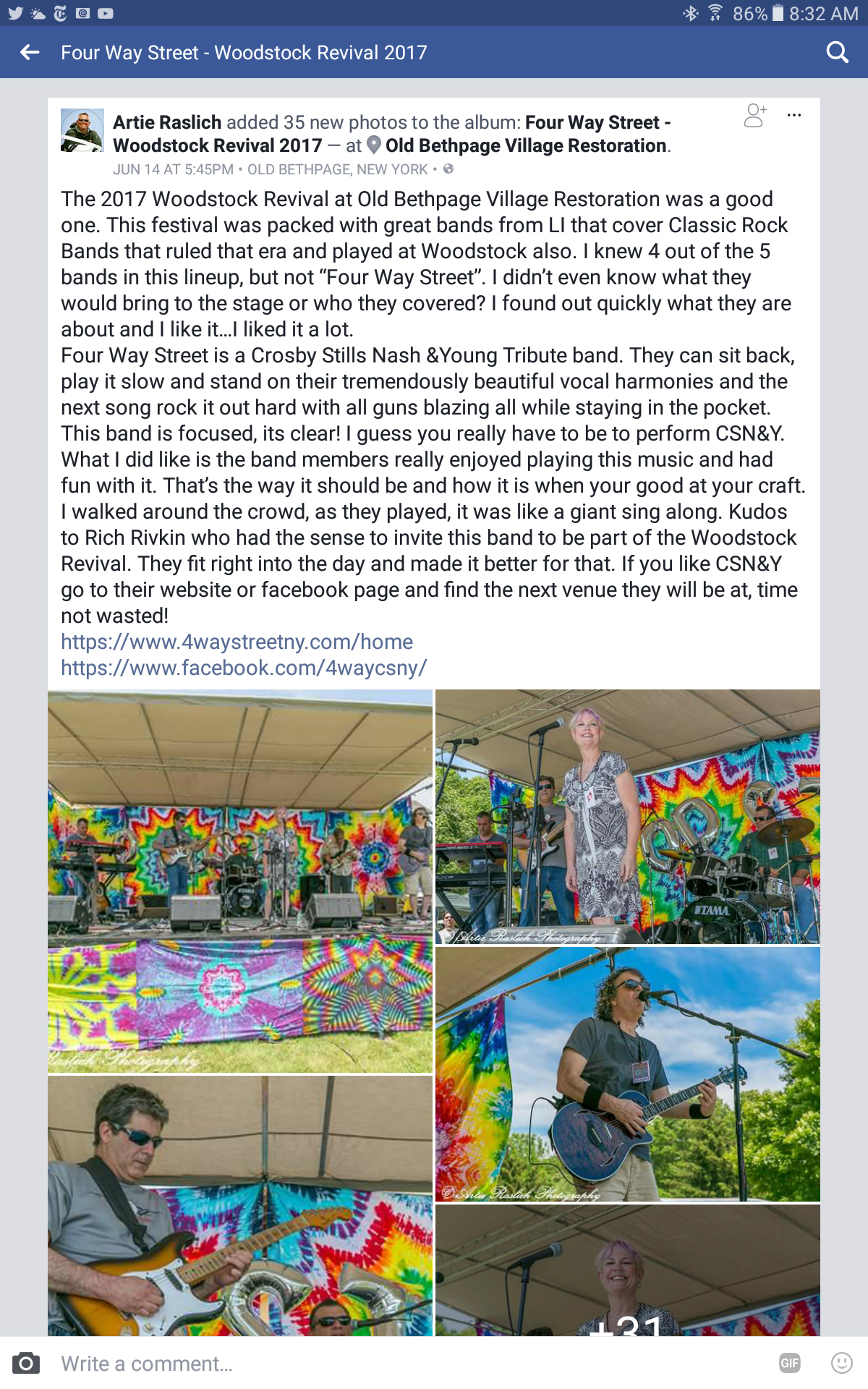 You may have been wondering why we've been "off the grid" for the past few months. The band had taken a hiatus due to our friend, brother and bandmate Sal Mingoia's health concerns. Sal has been undergoing chemotherapy for lymphoma, and has just completed stem cell therapy. Unfortunately, he will be sidelined for 3-6 months as his immune system recovers.

With Sal's blessing and encouragement the band has decided to move forward with our summer schedule, and we are pleased to welcome our good friends Tom Pecoraro (guitar) and Patty McTernan Spitzler (vocals). That's right, it's gonna take two people to fill Sal's shoes! 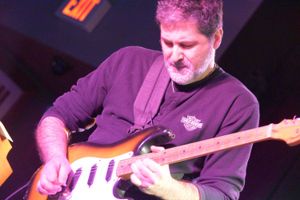 Tom plays with The Stanton Anderson Band and is well-known on the Long Island music scene for his generosity and friendship to musicians across the region. Tom's style is unique and diverse. We look forward to what he will bring to the FWS sound! 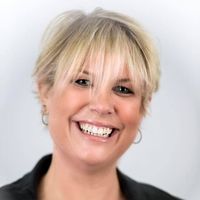 Patty is a native Long Islander who has spent the past few years in Nashville. She is a talented singer with deep roots in doo-wop, country and all manner of harmony-based music.  She is a perfect fit for CSNY material! Her tone and range will allow FWS to continue to present the tight, blended harmonies you have grown to expect from the band.

We are grateful to Tom and Patty for keeping Sal's seat warm while he recovers. We look forward to Sal rejoining the band later this year. In the meantime, we hope you will make Tom & Patty feel welcome as they join us for our summer tour!  First stop: June 8th, Foxwoods!

Our mini tour was a great success!

This weekend's two shows could not have gone better! Saturday morning we opened the Oyster Festival on a gorgeous fall morning to a large and appreciative crowd!  After that we had just enough time to pack up and head out to Martha Clara and a sold out show with an incredibly enthusiastic crowd! We brought in a film crew and a live recording rig so there will be a video forthcoming. Thanks to Steve Sage and his crew for an outstanding job capturing the video! Meanwhile, here's a sample from the the evening: 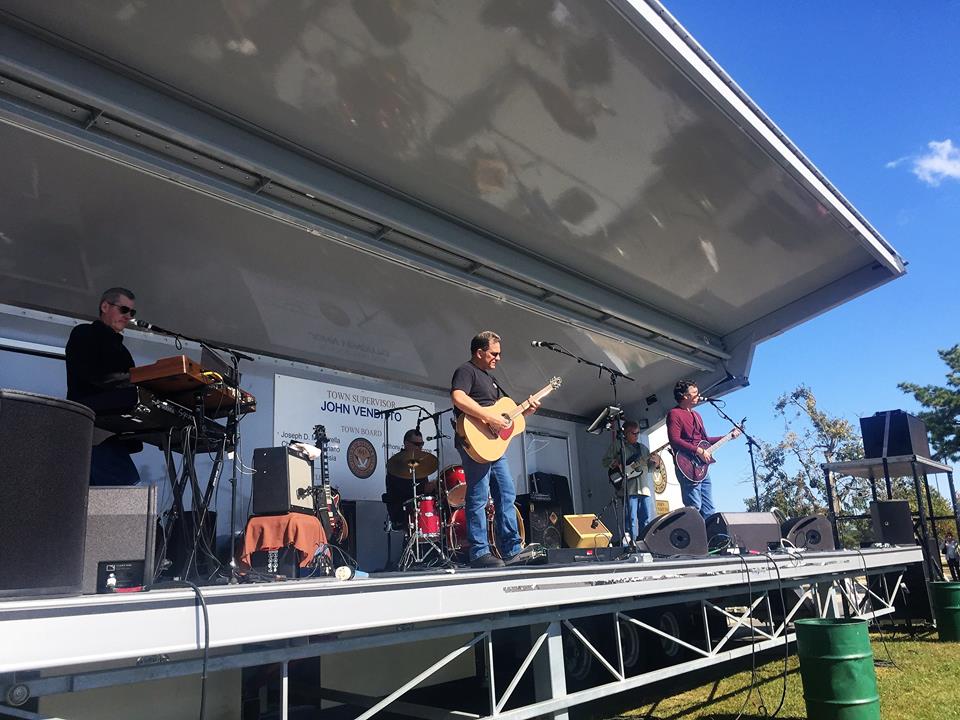 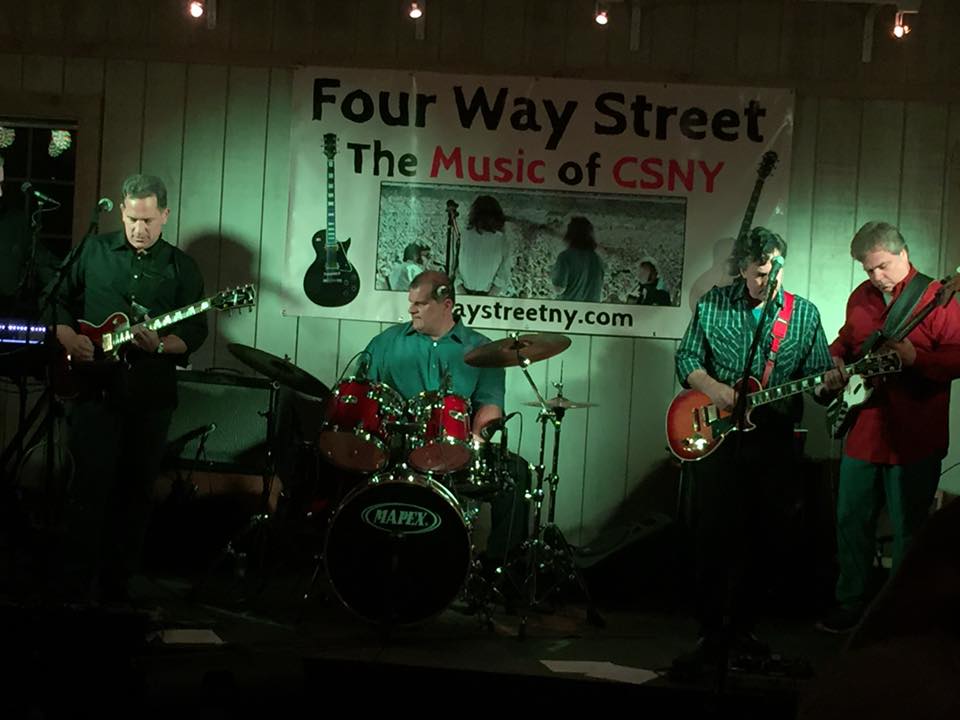 Four Way Street will be spanning Long Island for two great shows on October 15th. First up will be the 2016 Oyster Festival in Oyster Bay, NY at 12:30. Then we'll be out on the North Fork for the Martha Clara Local Concert Series where we will be shooting a live video!

Whether you live in Nassau County or on the East End, you can get your CSNY fix on October 15th! 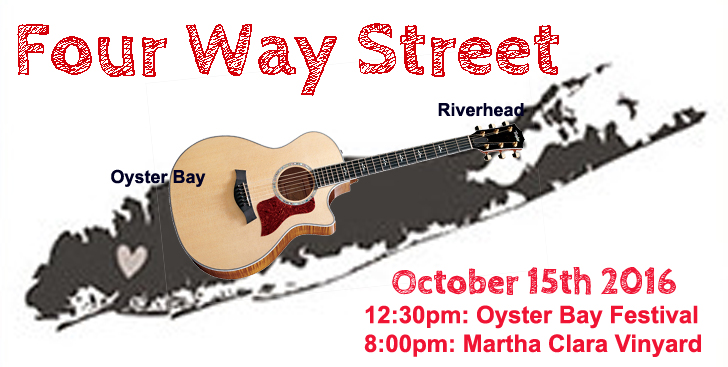